So, I Killed a PC Last Night in Our Pathfinder Game. Plus, PFSRD? And a PF Question

This is mostly me just thinking out loud before I've had my morning coffee, nursing a mild hangover, after a game where in the final moments a PC was killed, due to (IMHO) his own dumb-ass decisions and bad dice rolling.  So I'm in a thoughtful state of mind.  When a pc dies, I usually blame myself somewhat, or mentally grill myself to determine whether the death was due to some unfair thing that I did.  I'm not against killing characters, as a dm of the older school style of gaming, but if they die I do want to make sure it wasn't due to me being unfair in some way.  All I did was tempt him, he took the bait, looking for the reward, knowing the consequences.  He had ample warning every step of the way of the potential consequences.  Then, as always, he rolled like shit.  So in this case I think my conscience is clear.  Here's what happened-- 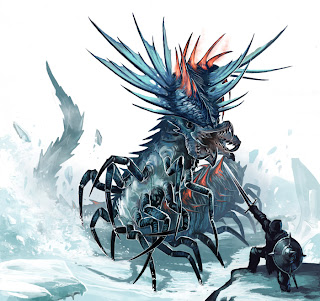 We're playing G-2, the Remorhaz igloo on level 1.  Room 28 I think it was.   I'm converting mostly on the fly to PF as I go.  The party knows there is a white dragon in the place. One pc, polymorphed into a snow white owl, flies on top of the igloo.  Hears nothing.  Goes to the entrance, sees some black scaly thing moving, feels heat, sees pulsating red.  Since that character is played by my brother, and according to him I've killed his pc's more times than I've changed my underwear, and, again according to him always unfairly (hey, I was 15, what can I say, he may have a point), he says no way in hell is the owl heading in there to investigate further.

He flies back up to the group, and almost as an afterthought, as the game is ending, I give the druid of the group, a dwarf, whose greatest claim to fame was that he screwed some nasty old diseased bitch one drunken night in a tavern, and who is played as a big pussy by my friend Pete, a chance to identify the thing based on the limited description the owl gives.  He is currently in Air Elemental form.  I make it a DC 25 knowledge nature check.  He fails.  I tell him if he goes down to look I'll give it a better DC.  He goes down to the entrance, I make it a DC 20.  He fails.  I say if he goes into the beast's lair, he will have a better chance.  Goaded on by some of the other PC's, and perhaps a bit by me chanting "Pussy! Pussy!"  he says he will go halfway down.  I tell him that whatever is inside there will have a penalized perception check to detect him.  More goading, and more pussy calling ensues, and he goes in.

Now he knows from the past that anytime he went into a place as an air elemental to scout around it never worked out right.  He knows he is the suckiest roller in the group, so bad that I've considered sending him to a priest to cast an exorcism on his dice.  He admits afterwards that he thought the thing in there was a white dragon, even though I described it as dark and it pulsated red and heat come from the 30 foot tunnel leading to the igloo.  So whats he do?

Sure as shit, he rolls almost as low as he can on a stealth check.  The Remorhaz rolls almost as high as it can, and it has a high modifier.  The thing detects him.  Initiative.  And you guessed it, Pete rolls like shit for initiative.  Remorhaz rolls high.  Remorhaz gets off the bite and the burn, then gets the grapple thing he can do.  In a couple more rounds of more shit rolls, the smelly dwarven druid who fucks ugly disease-ridden chicks is dead.

All my dice rolls are out in the open.  My conscience is somewhat clear on this one, though I feel bad for the guy.

I'm going to rule next sesion that his animal companion, a big lion or something, feeling the loss of his master, goes insane and runs away.  That wil give the group the clue they need to think that the druid might be dead.

As I was typing this one of my other players typed a poem as a eulogy to his fallen comrade--I'll post it here:

Cilrok, Cilrok, the Dwarven Drood,
Master of Kittens, Shapechanging Dood
Always supplying us with the best of weed, (I converted mistletoe in our game to marijuana)
Implanting the whores with his dirty dorf seed.
Greatly will you be missed, oh stinky one,
For your bones cannot be saved,
From the belly of the Remorhas,
That bit you in your hairy ass,
The one time you chose to be brave.

Alas...now at least I know his PC's name.  I've been calling him "The Sucky Druid" all this time.

And now, a question for Pathfinder DM's:

Do you usually have the Pathfinder SRD open in front of you electronically while playing the game?

I'm torn.  On the one hand, I can't stand having electronic stuff open by anyone in my face to face games.  It's hard enough with one player under 30 who is, like everyone of her generation, used to doing everything in life with while simultaneously texting or reading something on her phone.  It took us five sessions of mockery to get her to print up her character instead of using her iphone for it, after she was never able to find what she needed in a reasonable amount of time on the phone.

I don't want to encourage any more electronic interference with our game.  But on the other hand, it does make it ridiculously easy to find shit on the fly.  I'm running the old G series for the players, and we needed a winter wolf last night.  There wasn't one listed in the Bestiary I had, so one player looked it up on his phone and pulled stats from somewhere that I ended up using.  I don't know where the hell he got it, but it was good enough and worked.  Today I re-discovered the PF SRD, and holy shit.  It's a very well done thing, and I can totally see its usefulness at the table.  Wondering though, if you guys use a laptop or ipad at the table, do your players then feel like it is ok to use similar devices and break out the iphones and all that shit?

I guess I can just man up and say "No, only I can use a laptop while playing."  But who wants to be that guy, you know?  Plus, I hate electronic shit at the game table, like I said.  But the utility, you know? All thoughts on the matter appreciated.

Lastly, a question:  There will be one white dragon in the place.  I was looking up abilities, and the one I am considering using has something called Frightful Presence, as follows:

"This special quality makes a creature’s very presence unsettling to foes. Activating this ability is a free action that is usually part of an attack or charge. Opponents within range who witness the action may become frightened or shaken. The range is usually 30 feet, and the duration is usually 5d6 rounds. This ability affects only opponents with fewer Hit Dice than the creature has. An opponent can resist the effects with a successful Will save (DC 10 + 1/2 the frightful creature’s racial HD + the frightful creature’s Cha modifier; the exact DC is given in the creature’s descriptive text). An opponent that succeeds on the saving throw is immune to that same creature’s frightful presence for 24 hours. On a failed save, the opponent is shaken, or panicked if it has 4 Hit Dice or fewer. Frightful presence is a mind-affecting fear effect."

How do I determine if the effect is Frightened or Shaken?  They are two different things, as Frightened means you run , and shaken means you just shit your pants and get some penalties.  Panicked is if you are less than 4 hd, so I get that, and it won't affect my players since they are in the level 9 range.   I just don't get when the fail means frightened or when it means shaken.  Not clear, but I am not really that great with all the PF rules yet.  Any input is appreciated.