Is Business Bad at ENWorld? Shit Like This Can't Be Helpful 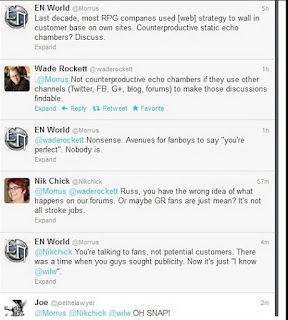 We start by approaching a town in the badlands, all walled up and Thunderdome-looking. They let us in, but Mike's monkey boy character had to pay a fee to enter, being an abomination and all.   Being called an abomination in a Gamma World setting really says something, I think.

We see a dude about a map, and end up buying a sailboat that cruises across the sand dunes, partly sled and partly on wheels, (I figure it looks like the one from the Martian Chronicles) to get to where the map told us to go.  We pick up a couple henchmen, one of whom can shape shift, and the other has lightning he can shoot from his hands short distances.

Anyhow, we zoom through a canyon with weirdass spores in it, and all have an acid trip.  Retards that we are, we forgot to buy gas masks in Gamma World, even though everyone in town had them on.  Duh.  Somehow Sir the Fist is able to still maneuver the ship through the cracks crevices and avoid crashing it into a rock wall.  I figure the acid trip had to help.

We find the place the dude/map sent us to, and there's an old hulk of a ship buried underground, the size of a skyscraper.  The blast doors are open, and we head on in.

That was our first mistake.

The place is massive.  There are catwalks and corridors, many levels up and down.  We head towards a glowing blue thing, because why not?  On our way, we come across a hacked up body.  After looting it, of course, we see the massive cat thing that was the likely killer, judging by the claw marks, several levels below on a catwalk, heading in the same general direction we're going.

Presumably still under the influence of LSD, we continue in the same direction anyway.

We hit a glowing blue wall, and have no idea how to pass through it.  We search and find the "Red Button".  Naturally, we have a henchmen hit it, since it is a "Red Button" and we all know never to personally hit the "Red Button," ever.  We all stand way the fuck back.  Lightning hands has to use his zappyness while hitting the button to have any effect.

We encounter what I think looked like some sort of small weaponized robot with lights. I blast it with a laser wand, and others with missile weapons, until it flies away.

Apparently it called for backup.

Next thing you know, two cyborg things on speeder bikes come at us, and start zapping paralyze beams in our general direction.

Now, in Castle Amber, Sir the Fist looted a Ring of Spell Turning off of the body of +Barry Blatt 's other pc, Noggin.  And its a damn good thing he did.  I rolled the only natural 100 that I remember in years, and one dude on a sled drops, paralyzing himself.  A couple of our guys are also paralyzed.

Now the other Robo-cop closes.  Our henchmen get involved, which brings up another fear, because apparently lightning hands and his buddy are twice our level, as we just discovered.  If we make it out of the fight alive, now I have to worry that our henchmen see our general level of pussyness and take us out after the fight with Robocop.

Robo-cop is a badass in his own right, blasting lasers out of his hand like Boba-Fett shoots missiles and fire.  Lightning hands leaps at Robo-cop, and in an Aikido style move, manages to dislodge the dude from the bike, throwing him into the blue wall of death.  Some slight damage is taken.  We all close in.  While Mike attacked the Robo-cop's laser-hand with a crowbar, trying to pry it loose, Sir the Fist closes with his sword and prays for a quick death, as it seems Robo-cop is like 10th level or something, and his lasers are melting steel girders when they miss.

Weaponized boxes the size of dump trucks, whose stats, Kyrinn implies, make Robo-cop look like a mosquito in comparison, are now approaching as we fight.

At one point in the fight Sir the Fist was the only one standing, thanks to the Ring of Spell Turning, with piss running down his leg.

We manage to finish off Robo-cop after a few lucky rolls, and discover that his hand is able to be detached, and one of us could hack off our own hand, Vecna-style, and attach it to the stump, thereby giving us a cyborg hand that shoots lasers.   Mike Heals up Barry with some random needle and potion thingy he found in a garbage heap back in Thunderdome.

As Sir the Fist does a pain/benefit analysis of the hand transplant, the Dump Trucks of Doom approach.  Screaming like little girls, we try to lower the blue wall, but to no avail.  We get the idea (wis check) that the hand of the Robo-cop might open the door if it touches a panel, since nothing else seems to work.

We get the door open, and Sir the Fist is the last guy standing again, as the rest of the group falls to the strange debilitating beams from the evil Dump Trucks.  Sir the Fist is able to get one guy out, and chooses +Barry Blatt 's guy, since the Ring of ST I looted off his other pc last month is the only thing that kept my ass alive this whole time.  I figure I owe him one.  :)

With the Dumptrucks approaching, I grab Barry's pc, fling him over my shoulder, and run my ass off, a trail of urine and fecal matter acting as Bobby Brady's popcorn trail in Hawaii, letting all know in what direction I ran.

The other guys were captured, and cyborgized, and let back into the Flailsnails universe.  I think one of them might have gotten laid with some redheaded chick somewhere, but I can't be sure because I was too scared to listen to all of what Kyrinn said happened to them.  They are now part of the Borg collective in some way, with implants in the back of their heads, Matrix-style.  Trust them at your own peril.  :)

And Mother of Christ was there a boatload of xp.  It was a fucking blast, literally and figuratively, and deadly as hell.  Makes Castle Amber look like a nice place to vacation.  Sir the Fist is now C-4, MU-3, F-3.    Next time I go back there though, I'm bringing Count Dooku's Clone Army with me, so I have a better chance of survival.
Posted by Joethelawyer at 9/03/2012 05:57:00 PM No comments:

Do you have bloodied and scarred victorious survivors?   Flailsnails characters a bit too tough for other G+ games?

Viking Dragonships brave the stormy seas to carry you there, anchoring off the rocky shore.  You're lowered over the side in lifeboats, and storm the beach like it's D-Day. 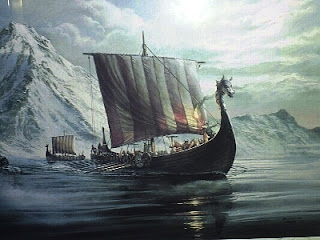 Set in the frigid Theilan Ocean, this mysterious island of chaos and abomination is the final resting place of many an adventurer.  They came for the gold, glory, and magic----and a few actually escaped to tell the tale.

This is a hex/dungeon-crawl island setting, hundreds of miles across, that gets more dangerous the further inland you go.  Past adventurers tell stories of lost wizard towers, fantastic keeps, caves and dungeons, all filled with monstrous horrors, each guarding treasure and magic beyond imagining.  Some battle-scarred veterans speak of a massive pyramid at its center, legendary seat of the gods who created the world, which holds the secret to immortality.

Adventurers have their choice of entry points---some inhabited, all dangerous.  Characters of all levels are welcome to enter, but those of 4th level or higher have the best chance to return alive.

This is an AD&D based Constantcon game, using the G+ Hangout.  Bring whatever Flailsnails character from whatever D&D-based system you want.  In an effort to get as many players as possible to experience the dangers and achieve the glory, I'm running it on various nights and days and times during the week.  It's a living setting, so what one group does affects the other groups' experiences.

The monsters are as unique and dangerous as I can create.  The magic is powerful, and often dual-edged.  The treasure is exotic and varied, easy to find, but hard to escape with.  Beware, it seems that some strange magic infects the island, as certain forms of fast and easy travel don't quite function as you would expect.  Feel free to cast those spells, I have plenty of random tables to let you know your doom.  :)

Let me know if you have a badass character with big balls who wants to give it a shot.  I'll add you to my invite list.  I know we all play in regular games on set nights and times, so I will try to arrange it so that everyone who wants to play can play.   List the best days and times for you to game, and I'll try to accommodate everyone.  (Please convert times to NY City time!)

The game starts in October.  Get ready!  Level up!  Loot the gold, buy the gear, hoard the spells and magic.  You'll need it.  :)