Adventures Based on Song Lyrics

Here's an idea---write up a weirdass adventure based on the lyrics of a song.  Include as many elements of the song into the adventure as you can, no matter what sort of acid trip type adventure it turns out to be.  Hang it all together however you want.  Have it make as much sense as you want it to.  Easy example:  Hotel California by the Eagles is just begging to be detailed.  Any ideas on songs that could make an interesting adventure? 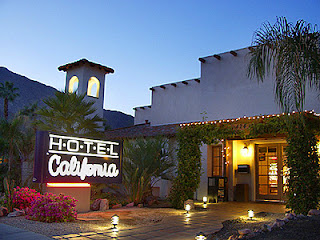 Details: The lighthouse has been there forever, a glowing beacon 30 miles to the south of our fair island of Valchasm. Sharp rocks and shifting treacherous tides have made it impossible to approach by ship. Likewise, walking from the shore for 300 feet was deadly, due to the waves, tides and rocks. Any flying attempts have ended in failure, usually due to Razorbeak attacks. No mages of sufficient power are willing to take such a suicide trip in recent memory.

Due to some odd weather anomalies, low tides this winter have been lower than ever, and have exposed the top portions of the treacherous rocks leading from shore to the lighthouse. The closest beach point is approximately one mile from the 300 foot peninsula of sharp rocks.

This posed a golden opportunity for an investigation. Landing close to low tide on the island, four brave adventurers took on the mission of crossing a mile of forest, braving the rocks, and trying to find a way into the lighthouse. Three made it back.

Second Edition Core Rulebooks to be Re-Released in May

Mine fell apart.  Worst binding on any D&D book ever, worse that UA.  I'll probably buy these.  I'm assuming they are the original 2.0 books, and not the 2.5 or the Players Options and Skills or whatever the hell the book was called. If anyone knows for sure though, please let me know.  It doesn't appear to be the binder debacle for the MM either.  Check it out...

Unearthed Arcana Reprints to Include Errata

Apparently the Unearthed Arcana reprints (I know, I know, everyone hates UA for what it did to the game) will include the errata published in Dragon Magazine.  There was a a shit-ton or errata, too.  Somehow over the years I ended up with 4 copies of the book.  Looking back at my original one, I taped the two pages of errata into the book between the last page and the back cover.  Looking at another one of my copies, the previous owner did the same thing.

Something I never noticed before, and something I would not have paid attention to in November 1985 (age 15) anyhow, not knowing its significance, is that there is a little box wherein it says "Permission is granted to photocopy these pages for personal use only."

That's funny, considering the OD&D books gained such popularity due to early photocopying machines on college campuses.  Also perhaps a bit of a preview, considering how draconian they later became with their idea of copyright and the internet under the tyrannical rule of Rob Repp, their online thug in the early to mid 90's.