Sir the Fist Has Capped. Man, Has He Seen Some Shit. Flailsnails!

I first created Sir the Fist of Uther, as a half-elf, follower of the Elven God of Magic, Uther.  I have no idea where I thought of the appellation "The Fist".  The whole purpose of Fist was to give me a magic user that would survive Flailsnails.  Every one I made kept dying.  I figured I needed armor and healing, so I made him a half elf, the only class in AD&D who can wear armor and cast mu spells.  Triple class, MU, Fighter, and Cleric. 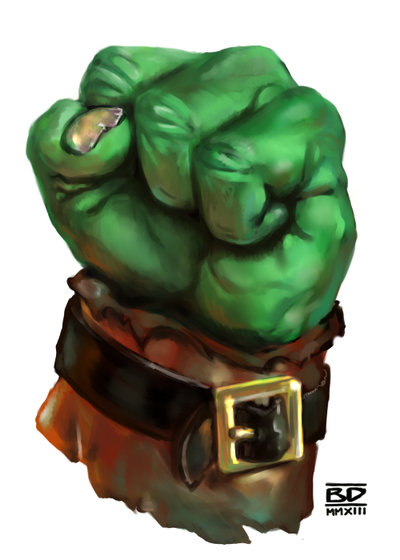 Since then he encountered a neanderthal ray in +Ian Burns Vats that made him a useless character as a mage, so I rolled the bones and committed suicide, after which +Zak Smith shoved a potion of reincarnation down my throat and I came back as a full orc.  Ian let me keep the mu and cleric class levels, but said I could no longer level up in them, and that thereafter I could go up as fighter and thief, and had to split xp two ways.  I could only gain any hp for advancement as a thief once, when I hit 6th level, my cap.  I got one roll/2, which happened today.  So I'm a weird 4 classed orc.  Godlike for AD&D orc, average as far as Flailsnails characters go.  I figure I'll never be the best at anything, but I have versatility and am a good backup now for most things.

Anyhow, +Zak Smith asked how many times he died, and that took me to the over 20 pages of game journals to see.  Memory Lane.  Here are some highlights from Fist's weird-assed adventures.

Also, it reminded me of how many of us used to DM awesome Flailsnails campaigns.  Hopefully you'll DM them again soon, I miss the weird shit you bastards come up with.  :)

6-13-12 played in +Trent B 's New Fiereland.  Played with +Zach Marx Weber 's assassin malice who was created and ran his first game in the Castle Zagyg dungeon I DM'd.  I was determined to find some way to get him to die without it being my fault so I could get the fire sword he got from Zagyg.  I have yet to make it happen, 3 1/2 years later.  The fucker is a survivor.

7-22-12 +Joey Lindsey DM'd a game where I made the acquaintance of +Zach Marx Weber Henry the murder hobo ballad boy, who will snort anything.

8-1-12 the first game of +Gus L Apollyon, which I dubbed "weird-assed ship" in my notes.  I loved going out and getting xp for scavenging crap like Sanford and Son would sell.

7-9-12 my first foray into +Ian Johnson 's the Bleaklands.  We had to capture a Pumpkin Boy.

9-1-12 my first foray into +Erik Jensen 's Wampus Country.  We dealt with trollsquatches, giant spotted skunks, and a scarebear.

9-3-12 played in +Kyrinn S. Eis 's Gamma World/Boot Hill mashup setting.   My first line in the comment section was "HO LEE SHIT."  We sailed across sand dunes, got hit by LSD spores, then ended up ion a dungeon where we had to fight robo-cop shit shooting lasers at us and I think someone had to sacrifice a hand to get out of there.  I've never been so scared of dying.  I was the only one to survive and I pulled out the corpses of the rest of the party.  The final note in the journal entry was "Next time I go back there I'm bringing Count Dooku's Clone Army with me so I have a better chance of survival."

9-13-12 I meet +Shoe Skogen 's Elsjinn on board the Apollyon, who becomes the bane of every one of my character's existences.  Though she won't admit she is in love with my other main Flailsnails character, Roscoe P. Coltrane, a Halfling F/T.  :)  Also I get a necromantic spellbook.  The first of many awesome spellbooks +Gus L  puts out into the Flailsnails 'verse thru the ghost ship from hell.

I played so many FS games onboard the Apollyon and Castle Amber during these months.  It was awesome!

9-28-12 played in +Reece Carter 's game.  Got a magical trident and a magical sword of shadows, now in +Zach Marx Weber 's possession.

This one you have to read in full, to get the fun of Wampus.  :)

During a break in the action between delves to Crumbledown, two of the usual suspects - the Rat-Bastards Ornibus and Abel - entertain several visitors to Wampus Country by means of a picturesque picnic on a hillside. Very quickly, Abel asks if the newcomers want to see what he has in his pocket - a deck of many things .

Elsjinn, egged on by Sir the Fist, draws a single card, the Comet , and she feels her potential short-term destiny shift. Not to be outdone, Sir the Fist draws two cards - the Gem followed by the Moon . Jewelry tumbles out of nothingness, which he quickly collects (save the bits stolen by Elsjinn and her chipmunk); further, Sir the Fist has a wish to make - and soon, before it expires.

While chuckling over their good fortune regarding the deck , the picnickers are startled by a monstrous roar, and a forty-foot rooster lumbers over the horizon, headed for the sleepy frontier town of Thistlemarch (which the Rat-Bastards call home at the moment). Concerned that the giant chanticleer might destroy the town, the adventurers spring into action, attempting to steer the beast by frightening it, and warning the townsfolk.

In the end, Elsjinn uses her ability to speak with animals to convince the rooster to steer clear of the town and return to the picnic, where it is fed stalks of corn and some magically-enhanced grasshoppers. Yet that feast is insufficient, for the rooster has many wives who also require sustenance. Calling up on the powers of the Serpent God Sethet, Reverend Jones also speaks with animals and warns the rooster that Ornibus' brother-snakes may be en route. Panicked, the rooster runs back to its home farm - with the adventurers in hot pursuit.

Back at the farm - belonging to Ernie Pyewackett, the guy who trains goats - the view is dominated by a half-dozen thirty-foot hens. Our heroes witness I giant hungry hen swallow a horse in a single peck. Abel uses hypnosis to calm the hens while Ornibus commands the rooster to sleep; Gimli checks on the frightened farmer and assists him in gathering flammables for a potential terminal barbecue.

Meanwhile, Sir the Fist investigates the intact chicken-coop, and finds that the seed corn in the trough has been magically altered, perhaps by someone pouring a potion of some sort overtop of it. Obviously, in such a situation, the right thing for a cleric of the God of Magic to do is to eat the rest of the corn as quickly as possible in hopes of becoming a giant.

Growing to a good thirty-five foot height, the now-naked Sir the Fist suggests using the black lotus powder in his kit to put all the chickens to sleep; through the use of some euphoric mushrooms to gather the hens together, and a potion of flying so Gimli can bomb them from above, this is accomplished, and all the giant chickens are subdued.

There is, however, one problem. Thanks to his detect magic spell, Sir the Fist can see that there is still a transformative process going on inside the chickens - just as there is within himself. He uproots a tree and crushes the heads of the hens, lest they grow larger or wake; simultaneously, Elsjinn steps into the rooster's beak and drives a weapon into its brainpan. The flesh beneath the feathers is roiling and bubbling even though the rooster is dead, and in mere moments the rooster explodes in a poultrytechnic display which scatters raw chicken meat across the barnyard; thankfully, Elsjinn tumbles to safety.

The hens, of course, are due to blow, so the adventurers hide in and behind the barn, and soon six giant chickens explode in sequence like a string of Chinese firecrackers; it takes several minutes for all the chicken chunks to come to earth, but when the thunderous sound of wet slapping noises ends, our heroes are hale and hearty. Or are they? It quickly dawns on Sir the Fist that he will be the next to explode in due time...

The adventurers high-tail it to the Stump-Witch, who has previously assisted Ornibus with curse removal (see also: The Platypus Incident). Sir the Fist trades a book of necromancy from the HMS Apollyon to the Stump-Witch in exchange for the cure, and he shrinks back down to normal size without exploding. He then utters the wish he gained from the deck and summons to his side a flying carpet.

Notice how +Shoe Skogen 's Elsjinn picked my pocket?  Also it was awesome to play on the same side as  +Gabriel Perez Gallardi 's character Gimli who he created for my Zagyg game.  It was also here that I got the flying carpet, bane of many a DM.

The DM note for xp to Gabriel is funny.

+Gabriel Perez Gallardi *GIMLI OF GEOFF* I ought to be penalizing you because my wife won't shut up about how sexy your accent is, but I'm going to be a fair DM here and swallow my pride.


At some point after October 5, 2012, I played in +Zak Smith 's tactical game set in the lands around Vornheim, and fireballed a catapult which burned the rope which shot the catapult rock at Fist which rolled like a nat. 20 and hit and killed him in one shot.  And that was the first round of the session.  I lost all my gear and had to buy some of it back.  Finally found a use for money in Flailsnails.  :)

2-8-13 Played in +Steven Goodman 's game, forst time ever, it was set in the Wilderlands, city of the Invincible Overlord.  My first foray into that setting as a player of any character.

2-27-13 The infamous Neander-half-elf incident.  Shit went down for me on that day.

3-1-13 Wampus game, traded a favor to the Stump Witch so I could get +Gus L 's tome back that I traded to her because the spells in it were so cool I didn't want that work to be lost forever.

3-2-13 played in +Shawn Sanford Dwellers of the Forbidden city game and got the badass sword with empathy and detect invis, at will, and also heal once a week.

2-1-14 first time playing Fist in a DC game, Shawn Sanford's that he plays every other Saturday.  It's weird taking an AD&D guy into DCC.  The conversion is tricky, but Shawn handles it nicely.

Elsjinn selling her soul to a devil.  I laughed heartily.  :)

Zach Weber's Malice cutting my eyeball out at my reuqest to implant an eyeball from a beholder in there---and it worked!  I think that was in one of Shawn's games.

+Chris H taking my half-elven eyeball and keeping it for some odd reason.  He's like the odd junk collector of Flailsnails.

I think I've played in more games with +Chris H than any other person.  Which is somehow fitting because I sorta got him into D&D with my face to face game we used to play at the Moe's burrito place in New Haven.  :)

I've played with over a dozen dm's, scores of players, and hundreds of characters and game sessions, and it's been fucking awesome.  Flailsnails rocks!

I thank you all for the fun I've had, and look forward to getting into more trouble with you all soon.

Also, if you see your name here for running a Flailsnails game and haven't in a while, I wish you would again.  It was a blast!  Let's do it again!