I've been thinking about this lately.  As a lawyer I can tell you that a lot, if not most, of the profession is complete bullshit.  It's made to sound confusing in order to justify ego's and hourly billing rates.  I know +Zak Smith has said similar things surrounding the terminology and jargon thrown around in art circles.  I remember a conversation with +Rob Kuntz where he described a game, DnD I think it was, that he and a player were so into they continued it at a pizza place, sans dice, books, character sheets, paper and pencils, where Rob had the guy guess a number to determine success or failure.  It worked because there was a trusted conflict or situational resolution system that gave the appearance of stuff not being arbitrary.

At its core, isn't that what all RPG rule systems are supposed to do? 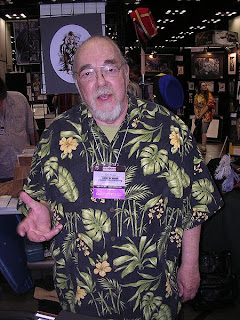 Look what we do with Flailsnails.  Isn't that sort of trust in the fairness of the dm at the heart of it?  Get 12 Flailsnails dm's together and give them a situation or conflict and likely there will be 12 different things made up on the fly to resolve that situation or conflict.  It's not complex, it's not rocket science, it doesn't even hang together as a coherent system.  But it's fair, trusted, and people have fun so it works.

So why such complexity in RPG design?   I think it's so people can claim to be game designers and puff up the ego. Also, to justify jobs and new editions and a stream of revenue for the corporate overlords.

Read this, then come back and continue with my post:

The famous quote attributed to Gary Gygax:  "The secret we should never let the gamemasters know is that they don't need any rules." maybe ought to be expanded to gamemasters and players, and seems to be the deep dark secret of the RPG game design industry.

Did we really need a Numenara, a game which deals with common themes in RPG's that have been around for decades, and just slapped a new resolution mechanic on all of it?  Do the rules really enhance the game that much?  Do they ever?  The only time I've ever seen rules impact the game is that the more rules you have the more the game sucks ass.

Beyond a small pamphlet-sized booklet describing some basics, which is really a hobby level publication, not the sort of thing that would support a multi-million dollar industry, what else is really needed?

Also, without new editions there wouldn't be edition wars.  New editions really aren't needed.  Therefore edition wars are basically the fault of the industry pitting groups of people against each other over shit that doesn't matter in the first place, which coincidentally lends itself as a perfect distraction to get stop them from even wondering if they needed a new edition anyhow, while game designers pick their pockets for 40 bucks for a hardcover, unnoticed.

Sounds like a microcosm of the real life plutocracy we live in, now that I think about it.