Stop Your Endless Bitching About Magic-Users Being More Powerful Than Every Other Class...

...because they're fucking supposed to be!

First, look at the source material.  Appendix N.  Read those books.  See where the game came from? 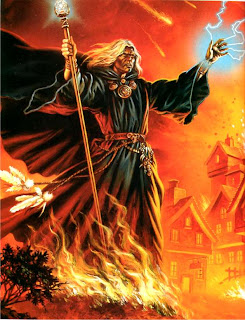 Second, you were warned:

OD&D:  "Top level magic-users are perhaps the most powerful characters in the game, but it is a long hard road to the top, and to begin with they are weak, so survival is often the question, unless fighters protect the low level magical types until they have worked up."

Holmes:  "Thus the magic-user starts out as an extremely weak character, but if he survives and rises in experience, he becomes increasingly powerful."

B/X:  "Though they are weak at first, magic-users can eventually become very powerful."

Basic (Mentzer):  "Magic-users start as the weakest characters, but can become the most powerful!"

Rules Cyclopedia:   "Magic-users start as the weakest characters, but can eventually become the most powerful."

AD&D 1e:  "Thus, while magic-users are not strong in combat with weapons, they are possibly the most fearsome of all character classes when high levels of ability are finally attained.  Survival to that point can be a problem, however, as low-level magic-users are quite weak."

AD&D 2e:  "Spells are the tools, weapons, and armor of the wizard.  He is weak in a toe-to-toe fight, but when prepared he can strike down his foes at a distance, vanish in an instant, become a wholly different creature, or even invade the mind of an enemy and take control of his thoughts and actions.  No secrets are safe from a wizard and no fortress is secure.  His quest for knowledge and power often leads him into realms where mortals were never meant to go."  (and they said this after gimping the shit out of a lot of MU spells!)

And then we get to 3.x and later editions, where all must be in balance and harmony, and god forbid any class/race/feat combination does more damage per round than any other.  The only thing I can think of that changed these expectations which were clearly laid out in earlier editions are shitty TSR and WOTC novels which broke with the swords and sorcery traditions, and MMO's.  Hello Everquest!

Also, I suspect that even in earlier editions, if there was grumbling and discontent, go back and ask yourself-- did you impose scribing costs?  Spell book loss chances from theft of fireball type stuff?  Chance to learn spells rules per intelligence?  Max number of spells known per intelligence?  Massive magical research costs?  Costs for traveling spellbooks?  Time away from adventuring for the wizards as he did these things while the other pc's leveled up?  Have the enemies target the magic-users as a smart tactical move?  All these things were a means of balancing out the classes by slowing down the power escalation.  Plus, the amount of xp needed to level up did the same thing.  I suspect if you did all this stuff talked about in the rules, the number of wizards in the campaigns would be far fewer and they would be far less powerful.

Shit, even when Flailsnails games started, I lost like three MU's right out of the gate.  I eventually made up Sir the Fist as a triple class F/C/MU just so the MU in him would have a higher chance of survivability.