I just deleted my last Facebook account.  Yup, last.  I once had three.  I had one for family, which I never went on because who wants their family to know anything about them.  I deleted that a while ago.   I had one for geek shit, but once I got onto G+ I deleted that.  My last one, the one for people I never see but used to see who can tolerate my shit and not be offended, I deleted today.  I figure they know my number if they wanna get in touch.  Getting tired of endless social media mediums and especially the lack of any really meaningful communication with them.  It's fucking with the way people communicate and deal with each other as human beings. 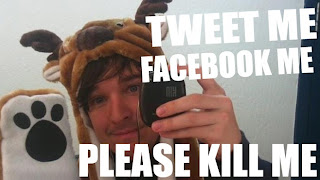 And fuck texting too.  I've seen people sitting in restaurants having dinner together, and texting other people.  And somehow that's not considered rude as hell?  Speaking of rude, it's no longer bad manners to talk to someone face to face and text someone else either apparently.

And has anyone seen our cute little zombies these days?  AKA anyone under 20 yrs old?  Ever see them without a cell phone in their hands for more than 30 seconds?  I'm telling you, it's fucking them up.  The constant distraction, they have no attention span and communicate like retards.  Plus the vanity.  All they do is post pictures of themselves.  WTF?  Selfies are taking over the internet.

I think I'll delete Tumblr next, after I post this.  It's been going downhill since Yahoo bought it.  The censorship is already beginning.  Twitter might come soon after.  I think I'll eventually just end up with G+ and Blogger for gaming related shit.

That and a plain old email address.

Anyone have any rotary phones they want to sell me?