Two Cultures Clash--Which Will Survive? Come to Zak's Show and Find Out!

On May 2, in NYC, +Zak Smith has a new art show at his gallery.  Last time we had a decent turnout of DnD types, maybe 15 or so.  It was a good time and a great way to connect with people in the area.  But we were far outnumbered by the Hipsters.  Let's change that. 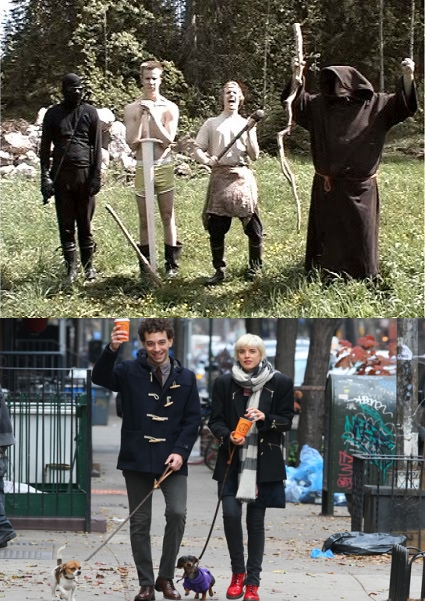 We'll hit the bar, then hit the Compleat Strategist.

Then hit the bar again.

Just don't hit the hipsters.  No matter how much you want to.

And believe me, you'll want to hit the hipsters.

If Pat Robertson is wasting his last few breaths of life saying D&D is evil, someone at Pathfinder or WOTC ought to try to leverage that shit and bring back 1983 again.
Posted by Joethelawyer at 4/18/2013 11:34:00 PM 4 comments:

So, last Saturday night playing in +Erik Tenkar 's game I was three sheets to the wind and asked him what this S&W day thing was all about.  He told me, and I promptly forgot all about volunteering to do something.  Until today when I saw 3000 posts.  Shit.

Thinking about a topic all day, I realized that while I like S&W in general, I would never run it.  Why?  Same reason I would never run any AD&D game for a campaign---thief skills.  The only thing I ever liked about 2nd edition was that they allowed thieves to adjust how their skills went up.  AD&D never did that.  S&W Complete doesn't do it.  So that makes the system a deal-breaker.

I've been using LOTFP's Grindhouse for my Blood Island old school games I dm on G+.  I like it's flexibility.  I've used it to create a lot of different things in the game.  However, as you've seen, the Blood Island games are few and far between these days.  Lack of time, laziness, and focus on writing other stuff seems to be getting in the way of me creating games to run.

And I do miss running games on G+.

So I figured I'd kill two birds with one stone.

I changed the thief skills in S&W complete to be adjustable by the player as they level.  This applies to all classes that use thief skills, like monk, ranger, and assassin.  Also, I made some other basic houserules, as shown below.  And I've decided to run a S&W Complete game every other Saturday, from noon EST to 3 pm EST, if enough people are interested.

I'm going to run TOEE, set in the time of the Greyhawk Wars, in a non-flailsnails game.  I'm keeping BI as my flailsnails venue.  This will be an interesting exercise for me, because I'm running the same game for the old college gang using Pathfinder rules, face to face on Sunday nights.  This allows me to both compare and contrast games, playstyles, systems, and to be able to run the games without much prep work.

Houserules are below.  Anyone interested?  Looking for a pool of people who, although they may not make it every week, are enough of a pool to draw a group from every other Saturday.


House Rules for the Swords and Wizardry Complete TOEE/Greyhawk Wars Game.
Ability Scores:
Roll 4d6, drop lowest, arrange as desired.
Fighters get the str bonus to attack and dmg for melee weapons and bare knuckles. Rangers get it for bows. Halflings for slings. All classes get the dex bonus to hit with missile weapons.
Intelligence and MU's: 17 int gives 11 spells max, 18 gives 12 max.
Clerics get the bonus first level spell for wis 15+, can can use it at first level.
At first level only you get to roll twice for hp and take the higher of the two.
Classes:
Monks, rangers and thieves now get to decide how their thief-like abilities progress. See below.
Monk not allowed to hide in shadows or pick locks.
Rangers: Spells known are actually druid spells and mu spells, not cleric and mu. Rangers gain the strength bonus to att and dmg if using bows that fighters get if using melee weapons.
Druids don't have to beat the shit out of other druids as they get to higher levels.
Races:
Demi-human level limits in effect, but add 3 levels to all stated level caps.
Dwarves can play Fighter/Clerics, but only of the Dwarven God of Battle Clangedin.
Elven mu's have the ability to cast druid spells, but only if it is memorized as any other mu spell from their spellbook. Even if non-elven mu's find spellbooks or scrolls of these elven/druid spells, they are unable to learn them. Druid spells are considered to be two levels higher for these purposes—in other words, a first level druid spell counts as a 3rd level elven mu spell.
Halflings add str. att. and dmg. bonuses normally reserved for fighters in melee to any attacks made with a sling. This is in addition to dex or any other bonuses.
Other:
Single saving throws.
Alignment won't matter much unless the class demands you to specify one.
Initiative and order of battle: d6 for the group, first one from the winning side to yell out what they are doing does it. Must act fast, minimal time to debate actions in the group. Players who are casting spells must declare the spell they are casting before initiative is rolled. If you are hit before your turn in combat and take any damage, you lose the spell.
Ascending AC will be used.
Firing missile weapons into melee is dangerous for your allies. Random rolls to see who it might hit.
Natural 20 = max damage, natural 1 = you cannot take an action in the next melee round.
Unconscious at 0 hp, dead at -1
Spellbooks, Scrolls, Costs and Maintenance:
Spellbook costs 100 GP.
Spells are hard to purchase from other mages, but when available, the prices are negotiable. Roughly:
Costs to scribe spells into your spellbook: 100 gp per spell level.
Costs to buy scrolls: 1st -100 2nd -500 3rd-1000 4th -negotiable
Time to scribe spells from one thing to your book: 1 day per spell level
Thief abilities for Thieves, Monks, Assassins, and Rangers
Racial modifiers allowed. No dex bonuses. No armor penalties other than armor allowed by class/race.
Starting Scores by Class
Thieves and assassins get to distribute 30 percentage points per level wherever they want.
Monks and Rangers get to distribute 20 percentage points per level wherever they want.
*Rangers can only climb walls at that rate if it is outdoors, like a cliff face or something natural. Otherwise their rolls are -25% for the types of walls thieves normally climb, like man-made ones.
**Rangers get move silently and hide in shadows, but all rolls are -10% if not outside in a wilderness or natural type of area.
Posted by Joethelawyer at 4/17/2013 08:19:00 PM 2 comments: