The Way Back Machine for new people coming into the OSR

I've given up questioning +James Raggi 's crazy business tactics, because no matter how nutty his ideas are when he tells them to me with manic energy and enthusiasm on G+ chat at 3 am, the shit actually works out.  His latest idea was to use Indie-GoGo  fund something to give away on Free RPG Day.  I'll be damned if he didn't get a shit-ton of money for it.

Now what he wants to do is gather a bunch of websites and blogs for those who find his product and are interested in the OSR.  People over on G+ (which seems to be the new playground of the OSR btw) are adding sites to his list.

This thing has been going on for what, five years?  This exploration of the old ways of gaming, the original source material, the history of the hobby?  Start dates vary, but in the early days there were not only amazing webpages and blogs, there were some posts from those bloggers that stood out as exceptional.  Shit that when you read it either changed your perspective, turned you on, helped you GET IT finally, or made you say FUCK YEAH! to the whole OSR thing.

My fear is that when you list all these webpages, some of which have thousands of posts, it will be overwhelming to the new guy trying to figure it all out.

Looking back into a old bookmark folder I set up in like '08 when I was first getting into the scene, I realized I not only bookmarked sites, I also bookmarked some individual posts.  One of them I think everyone knows about, Matt Finch's Quick Primer for Old School Gaming.

Another one was written by +James Raggi,  and it's just as good now as it was then.  I wish he would do more stuff like this sometimes, but I know growing the business takes up most of his time (and his living room)  these days.

His post I Hate Fun is here.  Read it.

Please feel free to add in the comments here or over on G+ other such individual posts that either changed your perspective, turned you on, helped you GET IT finally, or made you say FUCK YEAH! to the whole OSR thing.

Just wondering, I know +Christian Walker  was doing the excellent 'zine Loviatar, and now ﻿+Tim Shorts is doing one called The Manor, which I intend to buy after the next paycheck, but I haven't heard of any others.

Are there any other folks in the OSR putting out 'zines?  Are there any folks who did in the last few years, whether or not there are still issues available?  Seems like there ought to be an archive of such things somewhere, at least noting their existence if nothing else.

I'm really considering doing one for Blood Island.  It sounds fun.  Plus I like the permanency of it.  The feeling that what I write isn't going to be lost as soon as Blogger or G+ breaks.
Posted by Joethelawyer at 2/18/2013 07:11:00 PM 7 comments:

Well, not technically its Monster Manual, because James doesn't want one.  But still, if there is a book that deserved to be, this is it. 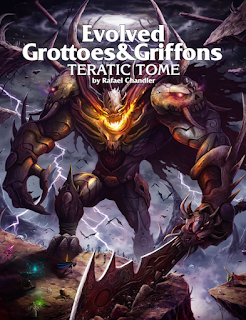 This is the first rpg book ever where I bought the pdf, then liked it so much I ordered the hardcover, because I want to use the art in my games.  Normally I could give two shits about art in rpg's.  There is some art that I love, but never before has it caused me to buy a book just to use it in a game because of that art.

I can't wait to hold up the book and say "You're fighting this!" and see the looks on their faces.

Looking for mundane useful Batman Utility Belt type shit that you can buy somewhere.  If the reason isn't immediately apparent for why you listed it, please explain its uses.  Has to be able to be carried by 1 pc along with the rest.

Announcement:
In recompense for having to cancel this evening's Blood Island game due to helping the parents out with Blizzard prep, I offer you this:

Flailsnails compatible. Join if you dare.