D&D with the Nephews

I think it was a success, as afterwards the 7 yr old spent an hour drawing his castle and the town around it and the secret rooms where they lived under the basement of the castle, and the 4 yr old simply asked me if I could live with them from now on.  :)

Matt played a ranger named Olwen, the class and name of his father's longest lived and favorite character growing up, and Sean the 4 yr old played a guy named Hulk, who was green and wore big armor and had a big sword.  They encountered a chest that had a jack-in-the-box that yelled "intruder alert!", a secret door, smelly dog-headed people, and a big bad dog-headed guy with red eyes named Red-eye Rick. 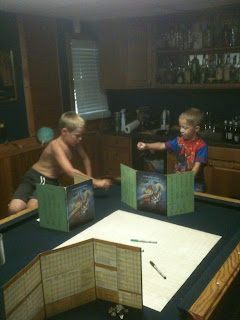