True Blood: Did it Jump the Shark Tonight?

I know I'm not the only fan out here in blogville.  Whaddaya think---did it jump the shark?  It seemed so gimmicky, the jumping ahead 1 year in time.  And WTF is with the fact that we're 45 minutes in before I see one tit?  Not even some gratuitous side boobage before that point. Not saying I watch JUST for the tits---but it helps.

On Making a Living in the RPG Biz

Two interesting articles, on the heels of the recent WOTC layoffs...

A New Round of WOTC Layoffs

Update:  Monte Cook is offering condolences via twitter to those laid off. Let me offer mine as well.  Good luck to you all.

They have an earnings conference call with shareholders coming up at Hasbro, and this is typical corporate proactive CYA behavior when a division didn't meet their earnings goals.
Posted by Joethelawyer at 6/23/2011 08:24:00 PM 5 comments:

What's With all the Zak/Raggi Hate Lately?

It seems to be building up lately for some reason.  I think part of it comes from jealousy---like this guy here.

To make such a personal attack is so childish as to only come from something like jealousy and/or insecurity.  After all, Zak is well known, respected, an author/artist and successful in many fields.  That Kent dude---well, let's just say that when comparing "size," and showing a picture of the guy and saying "little fucker", we all know what the insecurity about size is really based on here.  He must have done a torrent search for some of Zak's films.  I met Zak in NYC for his show last fall.  He's a nice guy.  (And by the way, the art is not photoshopped stuff.  It's all hand made, paint on paper stuff.)  And judging by the women he was with, the "size" that Kent seems to be really insecure/jealous about likely isn't a problem for Zak.  By mentioning that Zak looked gay, even more indications that there is something else going on there with Kent...Perhaps a tingle down below in the dirty places when viewing a pic of Zak?  After all, there was a desire to seek one out...

As for that Errand guy, any Psychology for Dummies type book will give insight into the sexual repression disguised as morality going on there.  It reminds me of the kid in 1st grade pulling the pigtails of the girl he likes, trying to get attention and yet be mean at the same time, because he's just a bit confused.  The way he alternates back and forth on his attacks between Zak and Raggi though, about the only thing I can figure is that he wants to be the middle bar in the Eifel Tower.

Shiterial = Material you read while taking a shit.

D&D Shiterial = D&D material you read while taking a shit.

You see, I'm not such a deep thinker as to go on about the esoterica of D&D's history for page after page, or to post about subjective issues like morality in D&D, and judge others by my own moral standards, like some dumbshit motherfuckers do.

However, I've found that personally, I'm at my most contemplative about life and the meaning and the nature of the universe while taking a good shit.  Buddha had his tree, I have my toilet.  I figured I'd combine that moment of perfection and oneness with the universe with reading D&D stuff from the bygone era and see where that leads me.

Did you guys know that on page 22 of the Judges Guild Ready Ref Sheets there is a half a page devoted to sharks, with a ton of different kinds of sharks, what type of water they are in, and their chances to attack people?   Pretty cool!
Posted by Joethelawyer at 6/12/2011 12:36:00 PM 7 comments:

Regarding the Morality, Art, Heroes, Anti-Heroes, Nihilism, Roleplaying Question of the Day

This scene sums up my point of view on every aspect of the debate.  I just can't explain how.

Remember when it was this simple?

My 6 year old nephew, setting up the epic battle between Thor and the army men.  In this picture he had his mother take with the cell phone, he had to make sure I knew that Thor was on the side of the good guys, along with his robot buddy.  Because Thor is obviously the good guy, the army men must be the bad guys.  Duh! 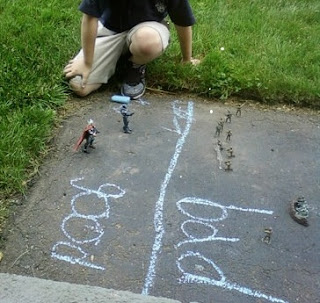 Skimmed thru it.  Won't play it.

Art:  I could give two shits about art that reminds me of art from D&D books in the 70's.  Call me a heretic, but I didn't think that the original D&D art was that great in the first place.  It was cartoonish.  People in my high school could doodle better crap than that at their lunch break.

Ask yourself---is the artwork good in its own right?  Or is it good because it just reminds you of happier more carefree days of playing D&D all weekend with your friends in the 80's?

Spells and their tables:  Yeah, lets complicate shit unnecessarily.  Good idea.   No one really likes reliability in their spellcasters anyhow.

Dice:  Where the fuck do I buy them?  Its hard enough to get people to play your old school games now---so lets throw in some required dice that no one owns and has never heard of before whydontcha.

Ask yourself this:  Is the game just overall neat on some indescribable level?  Reminding you of good times in the past?  Will you just be stealing stuff from it?  Using it as inspiration? Or will you actually play the thing?

It seems to me that the value in a game is proven when people actually play the thing with other people, and as a result those other people then go out and buy it.  If that doesn't happen, what's the sense?  Go ahead, steal shit from it, read it and get ideas, take a stroll down artwork memory lane.  But if you do so, call it what it is---a splatbook, or a source of alternative rules, like Arcana Unearthed.

If most people use it as a splatbook, or source of inspiration or a source for some alternate rules, then as a game in its own right it is a failure.

I'll take some bloggers word for it that it is old school in style.  If thats the case, and it draws more people to the old school tables, than hurray.  I hope it works out that way.  I just don't think it will, because of the above.

Looking for Some Advice Running a Skype Game, Both Practical and on Supplemental Programs

I've never tried a Skype game before.  Any advice on how to go about it?  I am also looking for supplementary programs--one to do some sort of whiteboard, and program where I can upload images to the group for all to see.  No dice rollers needed, I'll trust everyone to make rolls and report honestly what the roll was.  No grid combat tools needed to tell where the characters are at any given moment---I'm going to do the narrative combat thing.  Also, it doesn't have to be Skype--as long as it does everything above and is free to everyone to use, its fine by me.  Any suggestions as to supplemental programs or advice on anything else that you've learned in running Skype games?