In looking through the links on The Delve, I came across a 1982 interview with Gygax, in Thunderstruck (apparently a fanzine of some sort) in which he is describing the differences between D&D and AD&D. 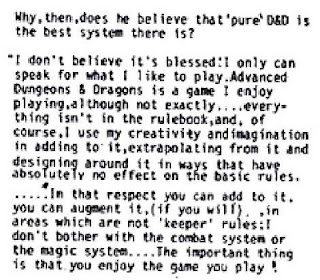 Soooo....if he is not using the magic or combat system of AD&D, which is similar to D&D, what was he using?  Did he mean he just used D&D's combat and magic system?   Or did he design his own, as might be implied by the context of that quote in the rest of the article?   (Read it, you'll see what I mean...)