Update on the Castle Zagyg Game This Past Weekend

If anyone is interested in playing this, or one of the other fine games being run there, just show up!

Has Anyone Actually RUN or PLAYED IN Castle Zagyg: Upper Works?

I ask because I'm running it Saturday, as was looking for any advice/tips from people who have been through it, on either side of the Screen.  I want to make it as good as I can, and don't have the ability to playtest it before Saturday.

One change I already decided to make in the interests of time is to skip all the hassles encountered on the way to the Castle itself. It will be a short uneventful trip to get there.  The only decision to make by the players is what approach to take.  I'm making any area of the Castle accessible, so have to be prepared to run any area at any time, necessitating a lot of prep time on my part.

One thing I noticed is that the module itself is kind of unnecessarily wordy in parts, so I am trying to make a Cliff's Notes version of it where needed.

Any and all advice appreciated.  :)

Regarding the Great TARGA/Porn Controversy:

Let he who never got a Chubby at age 13 in the 80's while looking at this cast the first stone: 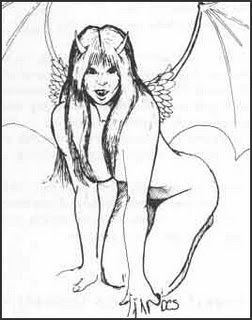 For those not familiar with the game, it is usually applied to members of the opposite sex, usually people you are friends with or work with. Out of a pool of only 3 available options, you have to Kill one, Marry one, and Fuck one, and state the reasons why.

The only 3 options are:

I'd fuck 3.x, because of all its robust and well endowed body parts, but would grow tired of it quickly because the relationship would grow more and more complex as time went on, giving me more and more headaches, when all I wanted was a quick roll of the dice.

I'd kill 4e because the sex would be a grind. You know you're gonna get to the climax eventually, but you have to keep at it for a boring monotonous hour and a half just to get there.

I'd marry older editions because even though she's aged and has seen better days, she knows what matters most in a relationship and gives me what I want quick, with a minimum of fuss.

The Whole Point of RPG's

I play role-playing games in order to engage in a sophisticated daydream about myself in the role of various dream-personae: knights, astronauts, superheroes."

"Think back to when you first got involved in this silly stupid wonderful time consuming life eating anorak wearing hobby. Did you become interested in RPGs because they were going to allow you to make up a story? Of course not. If you had any interest in telling stories, you were already telling them in that little red exercise book you kept hidden in your sock drawer. Nor did you get involved because they were going to be an excuse to participate in a dramatic process. There were school plays to deal with that. You role-played because you wanted to be a superhero, or a hobbit, or a vampire. You started to role-play at almost the exact same moment that you stopped "playing" in the old, primary-school sense of the word."

Not my words, but quotes from "All the Boys But My Johnny are Marching out of Step" by Andrew Rilstone.

The article accurately describes my thoughts and perspective on the game, almost as if I had written it myself.

I also understand his disappointments about lack of engrossment he gets into at the end, as my main group has sadly degenerated into that, due to similar factors he mentioned.

EDIT: THIS IS TO ADDRESS TIMESHADOWS' QUESTION BELOW, BUT WAS TOO LONG TO TYPE IN THE COMMENTS SECTION.

"Wanted to be" means, in this context, escaping into a different world, usually one you were exposed to in other media, like tv/books/movie/comics.

Perhaps most understandable as playing make-believe as a kid. When you were a kid, did you ever play make-believe, and pretend you were someone else, in some other place and time? Ever do it with other kids? Ever daydream about it alone? Remember how real it was? How much fun?

Notice how when you became an older kid, the sense of play went away as the engrossment, or ability to actually go there in part of your mind so as to convince yourself emotionally it was real, went away?

What you consider reality got in the way, or maybe your interests changed, or you couldn't get yourself to go there mentally anymore. Maybe no one would do it with you anymore. The fantasy wasn't as real. We all grew up.

As I play with my nephews and nieces, 2 of which are 4 and 5 respectively, I see what is lost when we grow up--the sense of wonder, that anything is possible, anything can be real. Complete and utter abandonment in imaginative play. Cowboys and Indians, Cops and Robbers, Superheroes---pretending you are one of them is just as real when you are 4 or 5 as the dinner you just ate. In a sense their imagination is unlimited. Their mind totally accepts it.

The article talks about a more sophisticated daydream, because I think it takes more sophistication to get your mind in the proper mindset to play make-believe as we get older (which is essentially what I consider D&D to be). It takes things like random chance rolls, world dynamics and history, character abilities, classes, and spell descriptions for example. The parts of our minds that developed since age 5 are stimulated and appealed to in order to access that part of us that is still 5 years old inside. We need that stimulation in order to get part of our minds to BELIEVE, at least partially. It takes all that in order to get there, as well as a group of people that agree to go there with you, and help you stay there, at least partially.

I say partially because we can never get there like we could at age 5. But we can touch it, at least a little. We can keep one eye on the kids, drink a coke, roll dice and do calculations, while the heart beats faster and the sweat builds as the tension soars while we wonder if we will make this saving throw and live, or fail miserably, knowing that you're the last hope against the tide of evil that's set to blast through your home valley.

It's not real, we know that. But its enough to give an emotional feeling as if it's real. It's safe to say that almost no one gets to be heroic in real life. None of us are larger than life supermen. We'll never get to experience saving the world, or rescuing the damsel in distress. Our emotional reality in terms of what we get to feel and experience is limited to the more simple things, family joys and pains, work stress, watching a nice sunset or a thunderstorm.

That's why, when he gets into how extra-game conversations and distractions get in the way of immersion, it kills the fun for him. He needs the rest of the group to agree to go there with him, to join him on the trip. To play make-believe, support his immersion as he supports theirs.

Another way to understand it, minus superheroes, is a shared drug experience. (The Doors' Riders on the Storm just came on the IPod, giving me the idea). Go one an acid trip, or take some other form of psychedelic drug or hallucinogen together, and each person's individual experience can be shared with and influence everyone else's in some way. The conscious adult logical mind with all its reality imposed rules and limitations goes away, and all thats left is the ride into some other reality.

While I don't recommend doing that as a habit, of course, its a good analogy to see where I am coming from.

It may be a guy thing. Who knows. I'm a little older, and when I played growing up, I never knew a woman/girl to play or even be vaguely interested in D&D, just like I never knew them to be interested in playing Superheroes in the backyard at age 5. Maybe women game for different reasons than men. I don't know.

As far as video games go, they don't appeal to my imagination in the slightest. It's just a game, no different than monopoly, other than the medium. As far as staring at the wall, it's not as fun, and its harder to get into that same state of imagination as at age 5. Inevitably real world stuff gets in the way, as I start worrying about bills, did I put gas in the car, and what time I have to get up in the morning for work.