Massive Hoard of Old School Gaming Material Looted at Local Store-----Check it Out!!!

So, as a result of what I posted last weekend, I contacted a local comic store which I didn't even know existed, that's right near my house.  I asked them if they had any Dungeons and Dragons stuff.  He said nothing new, just a few boxes of old stuff.  My interest piqued, I asked if I could take a look at it.

A MASSIVE collection of old school stuff, much of which I had never even hear of, going back to the 70's.  All kinds of odd publishers.  Apparently they had been in some guy's mother's attic since the 80's, and the guy just wanted the comic guy to sell them for him.

The comic guy said there were a few kids in earlier in the week, who asked if he had any D&D stuff, and he directed them to the boxes.  The kids took a look, and apparently not recognizing a thing they understood to be D&D, making comments about "old shit", they left it untouched.

Thank GOD for the stupidity of kids today!!!

I purchased it ALL!!!   I'll save the price to the end.  Before you ask, NO!  I am not selling a damn thing.  :)  I would be curious as to your best guesstimates as to how much it is worth though.

I just brought it home tonight. First, and most importantly, such a massive organizing endeavor required Beer.  Much Beer.  A 12-pack at least.  I'll put the pizza on hold until after the organizing. No sense getting the stuff greasy.

Next, I laid it out on my kitchen table organized by publisher and type, and typed up this list.

Note that this stuff is 99.5 % in fantastic condition.  Well over half of it, and most of the magazines, are in plastic sleeves.  The stuff looks virtually untouched. The only thing that has seen better days is the MM1, which looks like a Tarrasque got a hold of it. Everything else is in amazing shape.

Grimtooth's Traps Too (1982)
The Isle of Darksmoke 1, The Nameless Village and the Dome Level

DMG New Cover
Unearthed Arcana
Monster Manual 2
Field Folio
Players Handbook Old Cover
The Rogues Gallery
Players Reference Screen
Monster Manual Old Cover (pretty beat up spine, but this is the only thing in the collection in less than really good shape)
WORLD OF GREYHAWK (I put this in all caps because it is not boxed, but in a folder, with maps of Greyhawk, the maps are the same as the boxed set and thre is a booklet called the Gazetteer.  I've never seen or heard of this version before).

WG4 Forgotten Tample of Tharizdun
A1 Slave Pits of the Undercity
Q1 Queen of the Demonweb Pits
D3 Vault of the Drow
I10 Ravenloft II: The Houe of Gryphon Hill
I12 Egg of the Phoenix
C1 Hidden Shrine of Tamoachan
S2 White Plume Mountain (Orange Edition Extra Artwork)
WG5 Mordenkainen's Fantastic Adventure
UK1 Beyond the Crystal Cave
UK2 The Sentinel
C4 To Find a King
X13 Crown of Ancient Glory
I5 Lost Tomb of Martek
D1-2 Descent Into the Depth of the Earth
G1-2-3 Against the Giants
I11 Needle
MV1 Midnight on Dagger Alley (With Magic Viewer!!!)
H2 Mines of Bloodstone
N5 Under Illefarn (For Realms)
H4 Throne of Bloodstone
Waterdeep and the North
Empires of the Sands


The Price I Paid:

And best of all, I have a 3 day weekend coming up.  I now have plans for the weekend---Do Not Disturb!

What do you think it's all worth? Best guess? 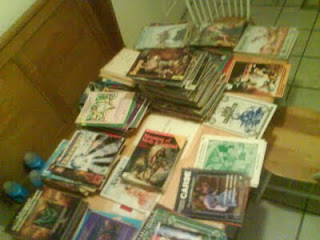