Why Doesn't Someone Just Make a Rules-Light Pathfinder, BECMI-Style, Using The OGL?

Pathfinder already put out their Basic Boxed Set.  The general concensus, like, everywhere, is that Pathfinder is doing a great job, keep on the current course, people are happy, D&D Next may take a bit out of you at first, but like all things designed to cater to everyone it will likely please no one, and fizzle out, and 6e will be out in a couple years anyhow.  So all Pathfinder has to do is survive the RPG war of attrition they are in, which they are positioned to do easily. 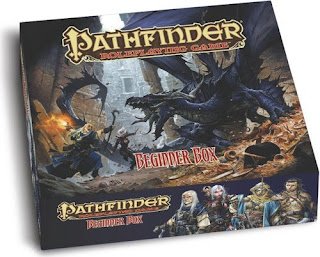 The only complaint/wish I ever hear about the game from both people who play PF, and people who don't but might if this wish is fulfilled, is that they create a rules light version.  They already started down this road with their Basic set.  All they need to do is expand upon it with a couple more, in the same spirit of BECMI.  They refuse to do it though.

Why doesn't someone just do this themselves using the OGL?  I think they are able to, right?  Of course, don't call it Pathfinder, but everyone will know what it is.  Seems like a no-brainer, right?  Who knows, if it's successful, you might even get an official one from Paizo.

Seems like a huge untapped market/opportunity just waiting to be exploited, but what the fuck do I know.  I still think damn near everything +James Raggi does is nuts, yet he keeps making money at it.  Shit, what a show-stealer it would be if Paizo did it to coincide with the release of Next at Gencon in 2014.  :)